Just How Smart is Your Dog? 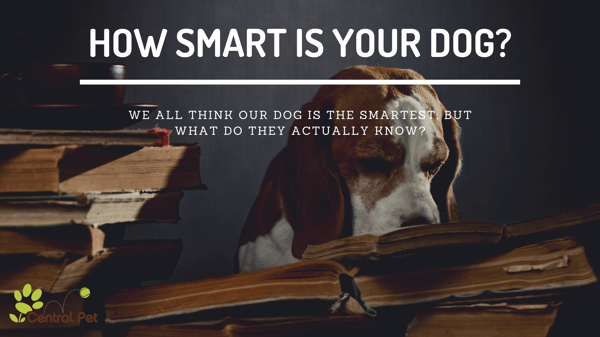 You talk to your dog and they listen, really listen. You look into those deep, soulful eyes and just know that they are taking in every single word– and understanding everything that you say.

How smart is your dog anyway? You may feel like you have an exceptionally intelligent canine. Maybe, but is it real intellect or is it just you wanting your dog to be a canine genius? Turns out,  you’re probably right. In fact, your dog may be even smarter than you think.

There was a time when people thought of dogs as, well, dogs. They eat, bark, poop, and beg for belly rubs. No thought, no awareness, just an animal following its instincts.

How smart is your dog? Well, hold onto your hat. This is probably going to surprise you.

How smart is smart?

There have been several studies that looked at the canine brain and just what it is capable of. The findings have been pretty interesting. It seems that the animals we thought of as “just dogs,” are not the instinct driven beasts that we thought. They are actually intelligent, sensitive creatures that in many ways are a lot like their human counterparts.

One very popular study that focused on dog intelligence found that the average dog has the cognitive ability of a 2 to 2.5 year old child. This means that their ability to solve problems, plan, reason, and learn is about on the same level as a very young human child. A dog can learn to recognize and understand around 165 words and phrases.

In some areas of cognition though, dogs may even be more on par with a 3 or 4 year old child. These so-called “super dogs” (Wait, aren’t all dogs super dogs?) are able to recognize and understand around 250 words and phrases.

In other words, your dog is much more aware of what is going on around them than you may have thought.

Dogs can pick up on new languages just by listening to people talk. They learn the meaning of the words and phrases we use every day then connect them to specific actions. For instance, your dog is on your lap. You say, “I have to get up” and your dog jumps down. You didn’t teach them that; they just learned it from being with you and from being in tune with you.

Research also found that dogs can count up to around four or five. They have the ability to understand basic math computations, even recognizing errors. They are great imitators and will learn by watching their humans or other dogs. And when it comes to getting treats, they will even try to deceive people and other dogs. Even better, they are often successful (Granted, it’s hard to deny such clever cuteness).

It was once thought that dogs responded to the way we said things, the tone and volume of the voice. Now though, research have discovered that our dogs actually listen to our words. And they understand them. They definitely do know what the words mean, no matter what tone you use when saying them.

What’s more, if you have ever thought that your dog was reading your body language or emotions, you were probably right. Researchers have discovered that dogs are definitely capable of these higher functioning behaviors – and more.

Scientists at Emory University conducted a neuroimaging study on dogs. They used an MRI machine to get images of several dogs’ brains as they were exposed to certain scents. When the scientists introduced the scent of a dog’s owner, the “reward center” of its brain lit up like a Christmas tree. In other words, the dog experienced pleasurable and happy feelings associated with its owner.

But what exactly does this mean? It means, yes, your dog does love you.

In fact, dogs are physically wired to not only live with humans, but to pick up on emotions and gestures. The canine brain is structured so that they are naturally connected to their humans. How cool is that?

Your dog was made for loving you.

Another study found that human and dog brains process certain types of information in similar ways, particularly human voices and the emotions they convey. It also found that dogs act toward their owners in a way that is very similar to the way babies act toward their parents. For instance, if a child is scared, they run to mom or dad. If a dog is scared, they run to their owner.

While this is exceptional in itself, the researchers also noted that other animals that are very intelligent, like horses and cats, do not exhibit this behavior. They run away. There is just a deeper connection between dogs and humans.

Have you ever noticed that your dog makes eye contact with you? Dogs want to make eye contact with the humans they love but not so much with other dogs. Aside from chimps, apes, and other primates, dogs are the only animals that look people in the eyes.

Love and devotion are not the only emotions that dogs experience though. They can also experience feelings of jealousy and can tell when they are not being treated fairly. In one study, researchers trained dogs to “shake hands” (give a paw). They put two dogs side by side and had both perform the trick, but only one dog was rewarded. The dog that was not being rewarded, stopped responding when they realized that they weren’t getting a treat but the other dog was.

When that dog was in another room where they could not see the other dog and was not aware of being treated unfairly, they responded to the researcher for a much longer time.

A dog knows when someone is doing them wrong!

Which dogs are smarter?

What makes one dog smarter than another? Canine intelligence is influenced by a number of factors such as breed, the dog’s environment, smart parents, training, and how they were raised.

Scientists have identified certain breeds that seem to have a little (or a lot) smarter than the average dog. The “smartest” dog breeds are:

If your dog’s breed is not in this list, don’t worry. The more time you spend with your them and the more you interact with them, the smarter they will be. Talk to your dog, interact with them, take time to train them, and they will come to understand you. They were made to be your companion and all you have to do is look into that sweet face to know that they genuinely adore you.

Now you can tell the world that your dog is one smart cookie – and you have the science to back it up.

Your dog is smart and smart dogs need to be challenged, kept busy. At Central Pet we offer a variety of training classes like Basic Obedience, tricks, and more. Contact our trainer today to schedule your dog’s training and watch them go to the head of the class!